Constitutional implications of law enforcements use of Geofence Search Warrants.

Jack Litwak recently spoke with the Associated Press regarding the dangers and constitutional implications of law enforcement use of Geofence Search Warrants. These warrants are used to track people’s data and google information, leading law enforcement to believe that an actual person was in the area of a crime. The dangers of this type of search warrant are evident through Mr. Litwak’s prior representation of Jorge Molina. Jorge is an innocent man who was charged with murder as a result of law enforcement’s tunnel vision stemming from these search warrants.

“Police are basically treating this like it’s DNA or Fingerprint evidence, but it’s not” said Jack Litwak, Molina’s attorney. “Jorge was nowhere near there and then he was accused of the worst crime you can be accused of committing.”

Since this interview, the jail population now has a 25% infection rate.

Madero’s attorney, Jack Litwak, now hopes for a delay or a reduced sentence.

The Phoenix attorney has suggested to the court that Madero needs treatment, not incarceration, and that he believes his client is on the losing end of criminal justice policies. A white woman with three DUI convictions and a history of violent assaults, he noted in a brief, was recently given a plea deal of six months compared with the six years offered to Madero. The longer Madero is behind bars, especially during the pandemic, the higher the risk of contracting the coronavirus, Litwak said.

Giving Back To The Community

Last week we were honored to sponsor a lunch catered by Carly’s Bistro for front line healthcare workers. 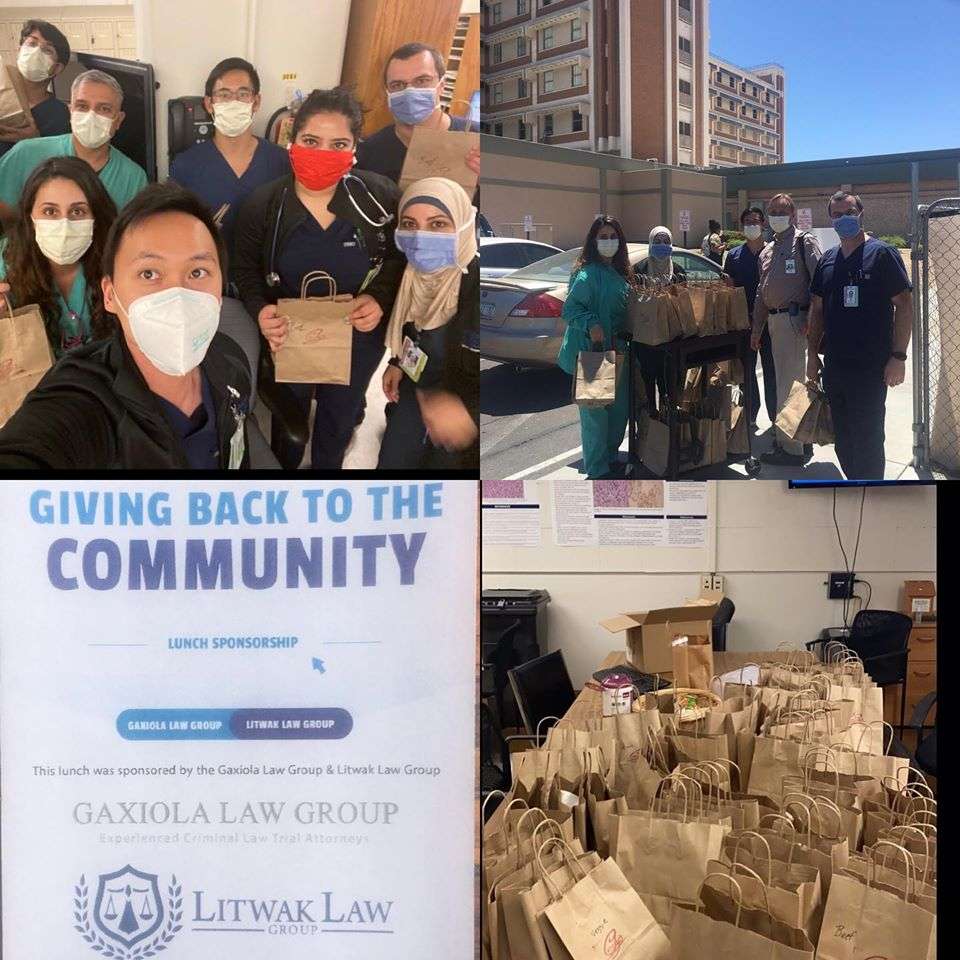 Our to-go event this past Friday at Kettle Black and Seamus McCaffrey’s was a tremendous success. Many hospital employees, truck drivers, firemen, EMS, construction workers, public defenders, supermarket employees, police officers, and court staff enjoyed meals on us throughout the day and were very grateful. The event also helped generate sales for both locations for all of the drinks ordered in addition to the meals we provided.

We are happy to give back and the positive energy is definitely necessary in the midst of all of this. We will be planning similar events in the near future, so stay tuned! Thank you Phoenix Magazine for helping us promote this event.

Attorneys Jack Litwak and Richard Gaxiola are sponsoring an event on Friday April 24, 2020, at Kettle Black Pub and Seamus McCaffrey’s Irish Pub and Restaurant in downtown Phoenix. They are providing meals to go for medical workers, first responders, and anyone deemed an essential employee that shows up with a uniform or ID to indicate where they work. The event will take the place from 11:00-7:00 for Kettle Black and 7pm-onward for dinner at Seamus.

They are sponsoring the event for three reasons:

1) To give back to local restaurants and bars, an industry that is taking one of the biggest economic hits right now. Especially downtown;

The U.S. Marshals eventually picked him up in Virginia in 2019 and brought him back to Arizona to face a charge of second-degree murder. He is currently awaiting trial in custody in a Maricopa County Jail.

Tracking Phones, Google Is a Dragnet for the Police

The moment Mr. Litwak met Mr. Molina, within 24 hours of his arrest, he knew he was absolutely innocent and wrongfully accused of the First Degree Murder charge. Yet officers somehow refused to see it—to look to evidence such as possible alibi witnesses and to look at text messages that supported those witness statements before they arrested Mr. Molina. Instead they relied on a drag net that uses data to show the physical location of the device accessing the google account, not the location of the actual account holder. They believed that Mr. Molina was at the scene of the murder at the time the of the murder because his google data appeared to show that his google account may have been there. Mr. Litwak, within 48 hours of Mr. Molina’s arrest, set out to obtain independent evidence that completely contradicted law enforcement’s claim. Mr. Litwak interviewed numerous witnesses who provided a very clear alibi: that Mr. Molina was not at the location the murder took place at the time it occurred. Mr. Litwak collected text messages and screen shots from the witness’s uber accounts and transactions that corroborated their interviews. Mr. Litwak submitted everything to the prosecutors office demanding Mr. Molina be released and that they not pursue charges against Mr. Molina as he was very clearly innocent.

The arrest and charge have permanently changed the course of Mr. Molina’s life. He was arrested at work, subsequently lost his job, had to drop out of school, had his car repossessed because the police held it for months, and had his mugshot plastered all over the internet forever associated with the accusation of Murderer. What happened to him was entirely unjust. The Litwak Law Group sets out to protect people from injustices such as this one.

The National Trial Lawyers is pleased to announce that Jack Litwak of Litwak Law Group in Phoenix has been selected for inclusion into its Top 40 Under 40 Criminal Defense Trial Lawyers in Arizona, an honor given to only a select group of lawyers for their superior skills and qualifications in the field.  Membership in this exclusive organization is by invitation only and is limited to the top 40 attorneys in each state or region who have demonstrated excellence and have achieved outstanding results in their careers in either civil plaintiff or criminal defense law.

The National Trial Lawyers is a professional organization comprised of the premier trial lawyers from across the country who have demonstrated exceptional qualifications in criminal defense or civil plaintiff law. The National Trial Lawyers provides accreditation to these distinguished attorneys, and also provides essential legal news, information, and continuing education to trial lawyers across the United States.

With the selection of Jack Litwak by The National Trial Lawyers: Top 40 Under 40, Mr. Litwak has shown that he exemplifies superior qualifications, leadership skills, and trial results as a trial lawyer. The selection process for this elite honor is based on a multi-phase process which includes peer nominations combined with third party research. As The National Trial Lawyers: Top 40 Under 40 is an essential source of networking and information for trial attorneys throughout the nation, the final result of the selection process is a credible and comprehensive list of the most outstanding  trial lawyers chosen to represent their state or region.